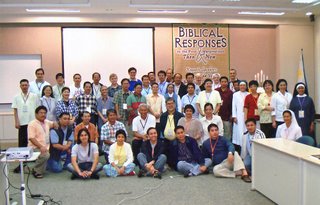 The Catholic Biblical Association of the Philippines held its 7th annual convention at Phinma in Tagaytay City, on the theme: "Biblical Responses to the Poor and the Marginalized, Then and Now." Prof. Gale Yee of the Episcopal Divintiy School in Cambridge, MA, delivered the main lecture on "Recovering Marginalized Groups in Ancient Israel: Methodological Considerations." Bernie Dianzon, FSP, who teaches at the Loyola School of Theology in Quezon City, also gave a lecture on "In Christ - Incorporation of the Marginalized Gentiles into the Covenant Community."

The workshop papers were given by Leander Barrot, OAR ("Purity of Heart"); Rustam Sabularse ("Monotheism in Ancient Israel: Pre-Monarchic and Early Monarchic Archaeological Evidence"); Renato Repole, SJ ("Eschatology and Ethics in Paul's First Letter to the Corinthians"); Regino Cortez, OP ("The Davidic Covenant and the Da Vinci Code Stunt"); Miriam Alejandrino, OSB ("Biblical Responses to the Poor and the Maginalized in the Gospel of John"); and Bienvenido Baisas, OFM ("From Marginalization to Inclusion: A Renewed Re-Reading of the Syro-Phoenician Woman in Mk 7:24-31a").

Two CBAP members who were recently appointed bishops actively participated in the convention: Broderick Pabillo and Pablo David. The latter, as Vice-President of the association, read the President's Report of Vic Salanga, SJ, who is currently on sabbatical in the U.S.

Archbishop Oscar Cruz, DD, of the Archdiocese of Lingayen, presided over the closing liturgy of the Eucharist.
Posted by Felipe Fruto Ll. Ramirez, SJ at 7:38 PM