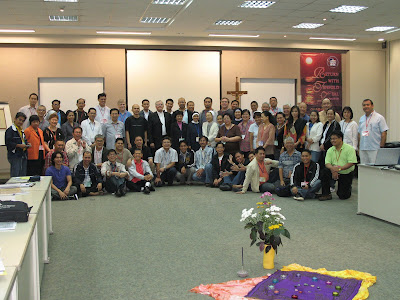 The 2009 Catholic Biblical Association of the Philippines (CBAP) Convention was held at the Phinma Training Center in Tagaytay City last July 17-19. Dr. James H. Charlesworth of Princeton Theological Seminary delivered two major papers, one on "Did the Serpent Deceive Eve?", the other on "Qumran and the Origins of Christianity.” Miriam Alejandrino, OSB, also gave a major paper on "The Disciples' Journey of Faith in the Johannine Perspective.” The workshops were conducted by Michael Lapid (“Early Christian Thought on Philippians 2:6-11”), Noli Mendoza (“Jeremiah’s Vision of a Suffering Earth”), and Freddie Billanes (“The Penitent Criminal in Luke 23:39-43”). CBAP is celebrating its tenth anniversary this year.

Click this to watch a video of the convention:

Click this to see various photos of July 17 (Friday):

Click this to see various photos of July 18 (Saturday):

Click this to see various photos of July 19 (Sunday):